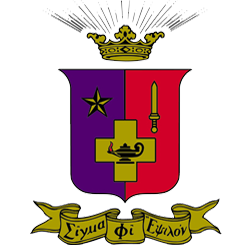 Sigma Phi Epsilon focuses on the pursuit of the Balanced Man Ideal of Sound Mind and Sound Body. We strive to live by our cardinal principles of Virtue, Diligence, and Brotherly Love, and to teach and instill these values in every member

The mission has been “Building Balanced Leaders for the World’s Communities” since 2001. The previous mission allowed the Fraternity to build a range of local and national programs to allow men to enhance leadership abilities and forge a strong brotherhood. Going forward, we will continue to refine and improve these leader-oriented programs while we focus on the holistic elements of balance that create a man’s best life as leader, brother, husband, father, mentor, community servant, and citizen.

With an estimated quarter million members, SigEps live, serve and work around the globe. They are having significant impact in business, government, community service and academia. Our mission is carried out through chapters and by cultivating the connections alumni have with one another.

1st in Fraternity GPA on the Oregon State Campus Chapter Cumulative GPA for 2012/2013 school year: 3.36 Up to $30,000 in scholarships given out to undergrads every year Leadership

SigEp typically has at least 10 brothers serving in various positions on ASOSU Won 8 consecutive Kerr cups, which are awarded annually to the most outstanding IFC Fraternity at Oregon State University SigEp at Oregon State currently holds the most Buchanan cups out of every SigEp chapter in the nation. This award is given out to the top 10% of SigEp fraternities every two years.

A house dance every term with Sweethearts in the winter, and Fireman's Ball in the spring Scheduled Events include Mom's Weekend, Dad's Weekend, Homecoming, IFC Sing, and several others Brotherhood Events range from Road trips and Barbecues to House Retreats and Camping Trips